Located on Mae Lamphan riverbank on the north side. The outstanding part is the bell-shaped pagoda with the 32 elephant statues surrounding at the base. Besides, there are Bot (hall) in the middle of the pond and the other pagodas surrounding the main pagodas. 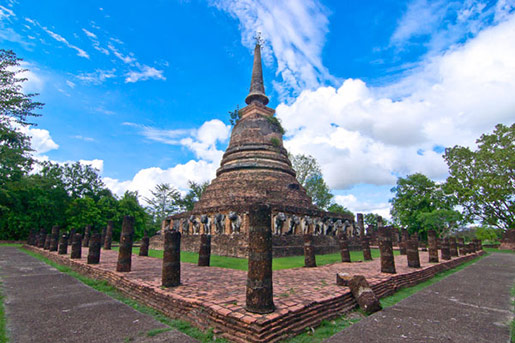 Wat Chang Lom is located to the north of Charot Withithong Road with a bell-shaped chedi of Ceylonese influence standing as the centre. The chedi is situated on a 3-tiered square base with a platform decorated with a row of elephants seen by their front halves supporting the round chedi.

The interesting part is Monthop housing Phra Achana image, the Buddha image in the gesture of Subduing Mara. Besides, at the side of Monthop, the 2nd stone inscription telling about the establishment of Sukhothai Dynasty was found. 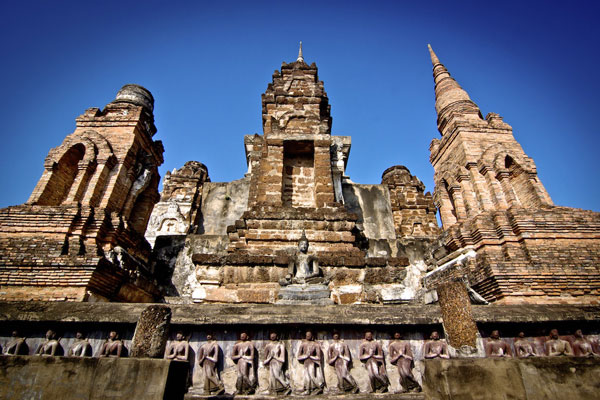 Closed by Legendha Sukhothai resort, this UNESCO World Heritage Site in Sukhothai was the original capital of the first Siamese kingdom. Surrounded by two moats and bridged by four gateways, the old walls contain the partially restored remains of 21 historical sites, including royal palaces and Buddhist temples. 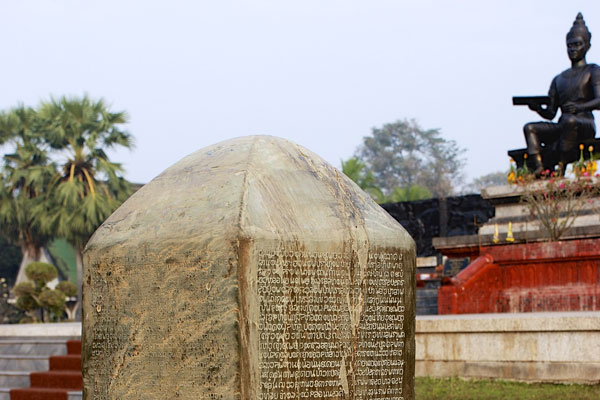 Located by Charod Withithong road, to the north of Mahathat temple. It’s built of brass mingled with copper- in I975.The statue of King Ram-khamhaeng sits on the throne teaching his people. At the side, there is an inscription depicting the King's life. 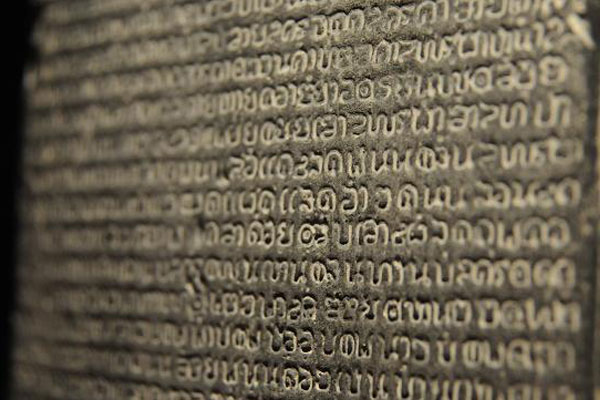 Located in the east near the ruined gate. The building was built in 1960 and open to public in 1963. It’s divides into 3 zones. The first is Lai Sue Thai building where multi vision slide is presented. Next is the building where artifacts are displayed. The last is the outdoor museum where there are the replicas of large artifacts. The tourists can get close to explore them in detail. 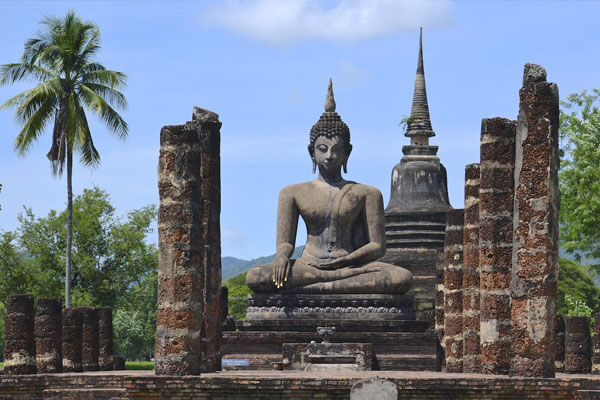 Within/ outside  the city wall, there are many historical sites to visit. You can start the trip at Tourist Service Center on the north and then follow the way on the left hand side first by waling or riding bicycle.

Located in the center of ancient town. The temp compound contains principle pagoda. Wihan, Monthop, and over 200 pagodas. The principle pagoda well presents Sukhothai architectural style. It’s surrounded by 8 pagodas in 8 directions. Four pagodas on the corner present Haripunchai style and the others present Sukhothai and Lankan art style.

According to the 1st stone inscription.  Wihan once housed a golden Buddha image. Later, in early Rattanakosin era, the Buddha image was installed in Suthat Thepwararam temple by King Rama I and then renamed "Phra Si Sakkayamunee" by King Rama II. Besides, there is another group of pagodas which is the second biggest the principle pagoda.

Located to the south of Mahathat temple. There are three Lopburi style prangs (pagoda) standing on the base decorated with stuccos. Besides the lintels, fragments of Hindu images and linga indicate that the temple once was a sanctuary of Hinduism. 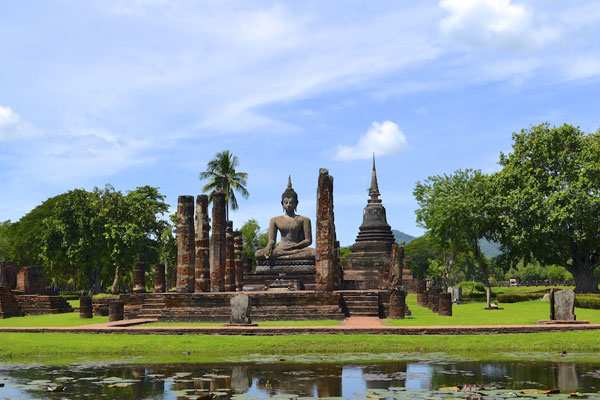 Located to the west of Mahathat temple. The compound contains the principle pagoda and Wihan with no parapet. The blocks in each side of pagoda houses the Buddha images in the walking and standing posture. Besides, in the east, there is an isle called “Traphang Ngoen”. 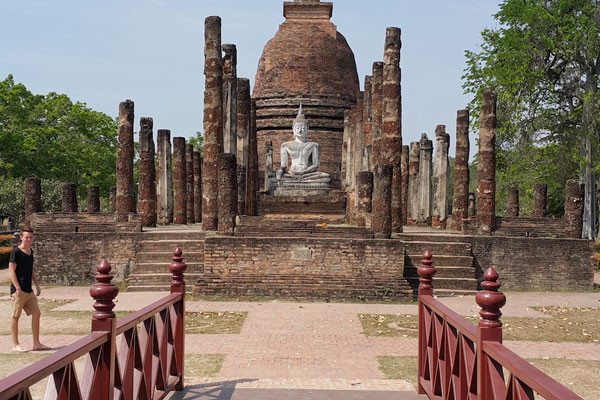 Located to the northwest of Mahathat temple standing in the middle of the pond called “Traphang Trakuan”. The interesting part of the temple is the bell-shaped pagoda which serves as the historical evidence of Singhalese Buddhism in ancient Sukhothai Kingdom. So, the pagoda in the shape of the bell is Lankan style. 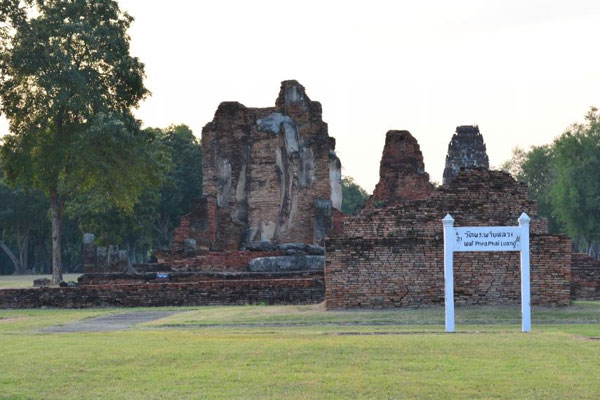 Is the most important temple next to Mahathat temple. The temple plan is in rectangular shape surrounded by the moats. There are 3 prangs as the principle part of the temple. Theses prangs made of laterite were built in Bayou style, Khmer art. At the front of the temple, there is a building housing 4 Buddha images in 4 different postures. 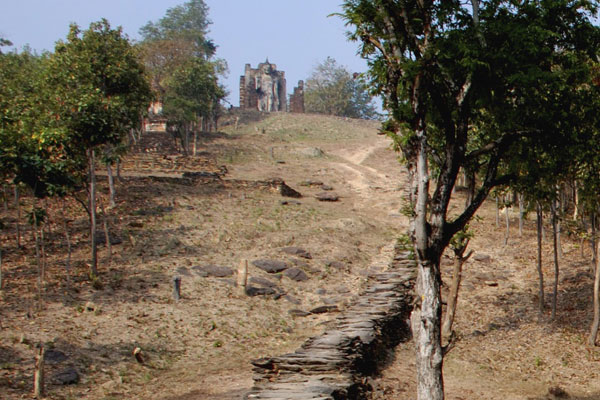 Located to the very west of the ancient area outside the city wall. The temple was named after the rock walking path from the foot of the hill to the temple ground. The only remain of the temple is Wihan which was built of brick and supported by the laterite pillars. Inside houses a grand Buddha image named “Phra Atsadarot”. 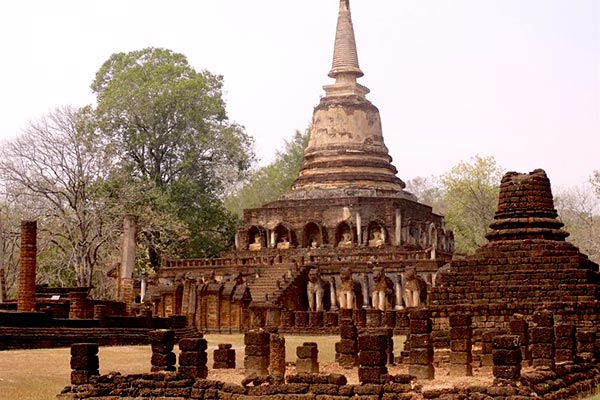 After a few days in Bangkok this is a great base to explore the temple sights both at Sukhothai and Sri Satchanalai. The hotel names itself a 'cultural centre' and we found this more authentic than touristy. The dance show is nightly and is charming and also includes musicians. Some tours pass through and stay only one night but it is well worth more time here.

It feels like turning back the clock to experience with the old Siam capital's heritage district ... Nowhere better than staying at Legendha resort... where the hotel is absolutely beautiful in traditional Thai village style, consisted of a series of wooden pavilions and surrounded by their own canal and garden. Great location where Sukhothai Historic Park is just 1 km away and Wat Chang Lom is located right behind.

“A gem close to the historical park”

This place is beautiful and charming. On site restaurant, pool, massage, and strong Internet. There is shopping, restaurants, and historical sights nearby. The monks come over for breakfast and you can help give them food. You can't come to this part of the world without DEET and you'll need it here

A new inspiring Thai village style to deliver you a delightful and relaxing getaway. Resort room exterior are designed similar to Thai ancient house while resort landscape is set in Thai village ambience to harmonize with ancient Sukhothai surrounding.