Together with Sukhothai, Si Satchanalai grew from a rural area to an urban character. According to a stone inscription, kings of early Sukhothai period reigned Si Satchanalai Sukhothai which had been formerly known as Chaliang. During the time when Sukhothai was annexed as part of the Kingdom of Siam with Ayutthaya as its capital, Ayutthaya people called Si Satchanalai by the name of Sawankhalok which was regarded as an outer province. After the sack of Ayutthaya by the Burmese in 1767, Sawankhalok became in decay and was finally deserted. In Rattanakosin period the town was relocated at Ban Muang Kao, three kilometers to the south of its old place, and was later moved to Ban Wang Mai Khon which is a present in Amphoe Sawankhalok of Changwat Sukhothai.

Yom river valley and areas at the foots of Khao Phra Si, Khao Suwan Khiri and Khao Phanom Phloeng hills were favourable places for settlement. Traces of prehistoric settlements were found both in and out of the town of Si Satchanalai, Moreover, along the river Yom,evidences belonging to Davaravati period and those associated with a culture contemporary with Lop Buri period were discovered at Wat Chom Chuen, Wat Chao Chan and Wat Phra Si Rattana Mahathat Chaliang.

Ancient monuments and objects all serve as archaeological evidences to indicate the existence of Hinduism and Mahayana Buddhism before Ceylonese Buddhism was brought in Si Satchanalai, These religious sanctuaries were considered beautiful works of art both in the field of architecture and sculpture and had later much influence on pattern and form of the art of the Thai nation,People of Si Satchanalai were renowned for their glazed ceramic khown as Sangkhalok which was exported far and wide to different countries and became for a period of time a source of income and a famous product of Sukhothai Kingdom.

The plains along the Yom river and the slopes along the foots of a few hills, including Khao Phra Si,Khao Yai, Khao Suwan Khiri and Khao Phanom Phloeng, in this river valley are strategic locations and quite fertile. These characteristics might explain why the valley has been continuously occupied since quite early times.

This temple is located almost at the center of the historic town, and is situated on the plain to the east of Khao Phanom Phloeng, an important low hill inside the town.

The sculptures of elephant at Wat Chang Lom are quite different from those found at other temples. These represent the fully standing elephants and are taller than the life elephant.

Some scholars believe that this was the temple mentioned in the text of the Stone Inscription Number 1, made by King Ramkhamhaeng in 1286 AD., as the place where the king dug up the Buddha remains in order to make a homage to the remains before he reburied and built a Chedi over the remains.

This temple is located opposite to Wat Chang Lom. The important constructions in this temple is the main Chedi with lotus shape top, a Wiharn Building and 33 subordinate Chedis. All the constructions were bounded by a demarkation wall. The whole building complex was originally surrounded by a temple ditch.

The late Prince Damrongajanuphap suggested that this might be the temple where the cremated remains of the Sukhothai royal family were kept.

The main Chedi of Lankan style is the focus of this temple. This Chedi is supported by a high base which was once decorated with sculptures of elephant similar to Wat Chang Lom. Another important and famous historic structure here is a Wiharn building made of laterite blocks. The exterior face of the Wiharn 's walls were decorated with highly elaborated stucco bearing the art style of early Ayutthaya period. 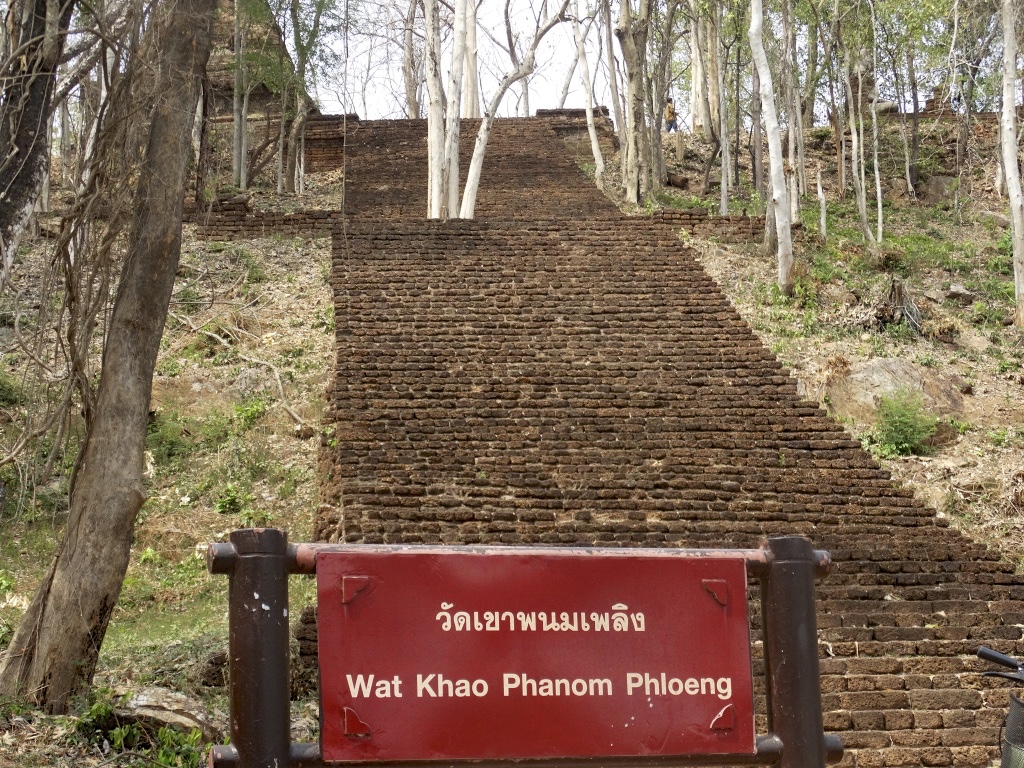 This is another temple built on the top of a hill. This hill, called Khao Suwan Khiri, is located just to the west of Khao Phanom Phloeng.

This is a large historic temple complex located to the southeast of Si Satchanalai town. The decorative stucco bearing the Bayon art style of ancient Khmer found at the main entrance of the temple as well as archaeological evidence excavated here point out clearly that Wat Phra Si Rattana Mahathat was orighally founded before Sukhothai period. Some scholars suggest that it was firstly constructed during the times of Pho Khun Sri Nao Nam Thom,or around 1237 A.D. Important building of this temple that can be seen in the present are as follows.


a) The main shrine

This was built from blocks of laterites which were in turn covered with lime plaster and red paint. Architectural characteristics of the shrine as seen in the present indicate that it could be dated to the Ayutthaya period. However, there are some archaeological evidence suggesting that the shrine might have been built to cover an earlier structure. In front of the main shrine is situated Siharn Luang Pho To. A huge Buddha image of maravijaya gesture was placed inside this building.

This is possibly remain of a Mon style Chedi built from blocks of laterite. It was certainly built in the different time from the shrine.

This building is situated just behind Phra That Mutao. As suggested by some scholars, the original Mondop might have sculptures of Buddha at each exterior wall and have a roof with ceramic tiles.

Located to the left of the Mondop, this building was built from blocks of laterite directly on ruin of a brick building.

The existing Ubosoth, situated in front of Wiharn, is a new building constructed directly over the historic one.

This is also called Sarn Phra Ruang Phra Lue by the local villagers. It was reconstructed in the same year as the Ubosoth.

This temple is located on the bank of the Yom river and is about 400 metres to the east of Wat Phra Si Rattana Mahathat.

The important Sukhothai period buildings that can be seen in this temple during the present days include a main Chedi of Lankan style, a Wiharn building, and a Mondop. These were built from blocks of laterite.

15 inhumation human burials excavated here at a depth of about 7-8 metres suggest that the area around this temple was firstly occupied during the 3rd - 4th century A.D. The human habitation of this area was continued up to at least the 6th - 7th century A.D. Then, around the 11th century ad., 2 groups of large brick buildings were appeared in this area. Finally, a Sukhothai period temple was developed here.

This temple is situated behind Wat Chom Chuen and is another group of historic buildings which became in existence since the Pre - Sukhothai times. The important historic structure here includes a main shrine with ancient Khmer architectural style. This shrine was built from laterite blocks.

Besides, recent archaeological excavations conducted here had unearthed deposits containing some brick fragments and characteristic artifacts of Davaravati period, dated around the 6th - 10th century A.D. These evidence suggest that some brick buildings might have been presented in this area before the laterite shrine of Khmer style made its appearance and replaced them.

They are located about 5 kilometres from the Si Satchanalai ancient town. About 200 Kilns are now found in and area measuring about 1.5 square kilometres. These can be divided into a few groups. As of the present, 2 groups of kilns had been archaeologically excavated and developed into site museums. These are as follows.

This group comprises 4 underground kilns dug into the reiver banks. The main products of these kilns were large jars that could be used to store water and other dry materials.

19 Kilns have already been found in this group. These kilns can be divided into 2 major types; namely the updraft and crossdraft types.

Archaeological studies made on the ceramic kilns at Ban Ko Noi have yielded much knowledges on the developments of ancient ceramic technology of Si Satchanalai as follows.

The earliest type of kiln appeared at Ban Ko Noi around 11th - 12th century A.D. was the underground bank-kilns. This early type of kiln looked just like a round hole dug into the river banks. There were no fired wall to separate the pottery firing chamber from the fuel chamber.

The second type of kiln at Ban Ko Noi was the above-ground constructed-kilns which were much larger in size than the earlier type and were constructed directly over the earlier kilns.

The later type of the above-ground kiln was constructed from bricks. Glazed pottery produced in these later kilns, dated around 14th - 15th century A.D., were of various types and shapes. During this time, the glazed pottery of Si Satchanalai, known as Sangkalok, were exported to as far as Japan, Indonesia and the Philippines.

A new inspiring Thai village style to deliver you a delightful and relaxing getaway. Resort room exterior are designed similar to Thai ancient house while resort landscape is set in Thai village ambience to harmonize with ancient Sukhothai surrounding.